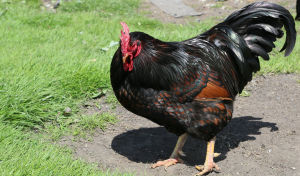 The brilliance of a chickens feathers.

So what are feathers for?

Feathers are unique to birds and are the protective outer covering of chickens and serve three important purposes.

To help keep the birds at the right temperature and afford protection to the body from rain and injury. They enable flight and serve as display for courtship and for the fancier to show.

Feathers are poor conductors of heat so insulate the chicken well against the cold.

There are three main types of feathers, normal, frizzled and no quills (as in the silkie). Feathers with quills are pennaceous and plumulaceous or downy have fine or no quills.

They are waterproof to an extent but a chicken will not stay dry like a duck would for example.

The feathers of the male are usually more vivid , showy and brilliant than those of the hen.

Feathers are of little commercial value these days.

You might notice a few plates from old poultry book like this one below. I could not have done any better so I haven't tried and they are free of copyright.

Below: The different feather patterns commonly found in chickens. 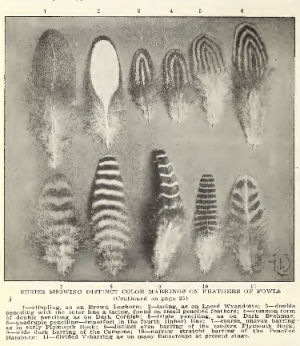 Why do chickens have feathers?

Feathers are the product of many hundreds of thousands of years of evolution and enable the chicken to fly. They grow back in a similar way to hair if they fall out or are plucked out.

Patterns and markings keep them and their offspring camouflaged, keep the bird warm in winter by trapping air next to the body to insulate the chicken and they keep the sun off the tender skin and keep the temperature down in hot sunny situations.

If you exclude the heads of some vultures and the Transylvanian naked necks, birds are covered with feathers and the humble chicken is no different. The average chciken has dozens of different types of feathers, all adapted to different uses.

Flying – Even though chickens are not the best flyers, they can do and this is the main purposes of the flight feathers. Feathers provide a large surface surface area on the wings for powering flight, on the tail for maneuverability and all over the body for a streamlined shape. The aerodynamics of the feather allow the bird to fly and maneuver in the air.

Insulation – They trap air next to the skin and keep the bird warm in winter and cool in summer. They also provide a barrier to the wind and sun and protect the delicate skin.

Waterproofing – Feathers can shed off an amazing amount of water. Especially ducks, hence that saying 'water off a ducks back'.

Camouflage – With wild birds and the pattern of some species of feathers help the birds to blend in with their surroundings.

Protection – They help protect the skin against all manner of weather and insects.

Courtship and display – Chickens do not really use their feathers for courtship or display like a peacock would, for example. In many avian species the colour and use of plumage in courtship displays will determine who gets to mate. More often than not with chickens it is the keeper that chooses the mating flock.

Sensations – There are structures called Herbst’s corpuscles at the base of the feather which are thought to be able to detect changes in air current and sound vibration.

Show - Humans have bred chickens to have all sorts of different feather patterns for showing.

Feathers evolved over considerable time and their uses to the bird are numerous being both incredibly strong yet lightweight, only 3% to 4% of the total weight of the bird is feathers depending on the breed and size.

What is the structure of feather?

Feathers are long and thin with a stiff hollow quill supporting the barbs of the feather. The barbs are either soft and fluffy in insulating feathers like down or locked together with hooks in the flight and tail feathers.

It is important for the feathers to be relatively broad, with a web of good firm texture, a strong shaft, the barbs, barbules, and barbicels closely and tightly knitted together. This is the desired feather type for most breeds. There are some exceptions, like the silkie which has no quill in the feather. 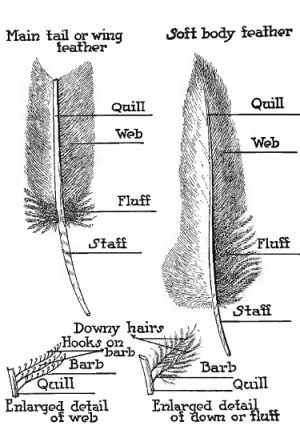 Image above: The structure of a feather.

The Staff of the feather is the base part of the quill that anchors it to the chicken. Down feathers are thos with no hooks and have a fluffy apperance.

How do chickens look after their feathers?

By dust bathing and preening.

What are the patterns on feathers?

These are some of the basic feather patterns. Some are more complex than described.

1. Stippling or peppered like on a brown Leghorn.
2. Below: Lacing as you would find on a Wyandotte. Could be double laced as in a Barnevelder. A contrasting border around the feather. 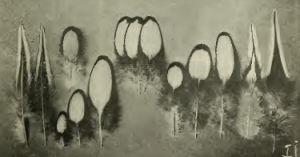 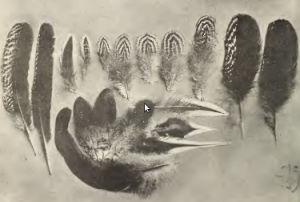 4. Below: Barring is two alternate colours along the feather and can be distinct as in a barred rock or more muddy as in crele. 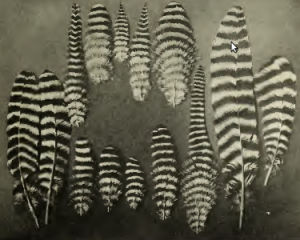 5. Below: Spangled Feathers have a distinct V at the tip in a contrasting colour, normally either silver or white with a black tip. 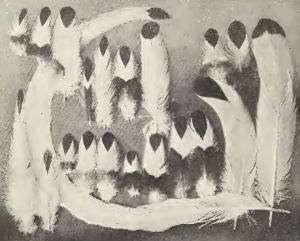 6. Below: Mottled are more or less the opposite to spangled with black feathers and a tip of white. 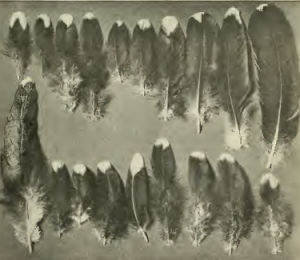 The different types of feathers:

This is where you meet Mavis. Or more accurately her wings. Being a showgirl means she is a bit more amenable to being handled.

Below: This is the wing from underneath with the types of feathers labelled. 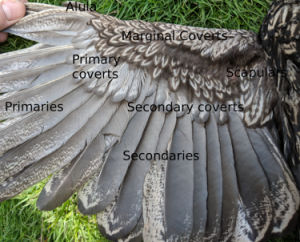 Contours - As the name suggests, these are what gives the bird its shape and main colour.

Secondary feathers - The long straight feathers that make up the central section of the wing. 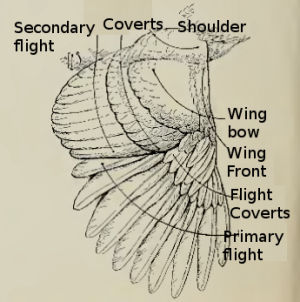 Above: the Wing feathers on the top.

The tail flight feathers are known as retrices.

Down - These feathers are found at the base of the contour feathers and cover the bird as insulation. These are the same feathers you can find in a down jacket.

Semiplume - These are a cross between the contour and down feather. They add extra insulation in addition to the down feathers.

Filoplume - Tiny, wisp-like feathers that grow around the base of contour and semiplume feathers. These are attached to nerve endings and it is thought that they provide the bird with information about the environment and condition of their feathers.

Bristles - You will notice these around the eye and head and it’s believed they play a sensory role.

Below: Location of the types of feathers on a chicken. 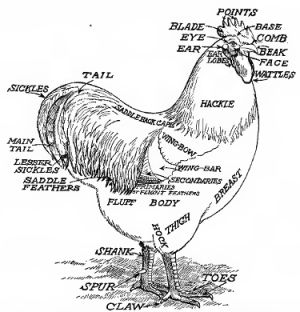 How much do feathers weight?

I am lucky enough to have an analytical balance ( Think very accurate scales ) that can measure to the ten thousands of a gram.

Feathers need to be light and strong and surface area is important especially on the wings. 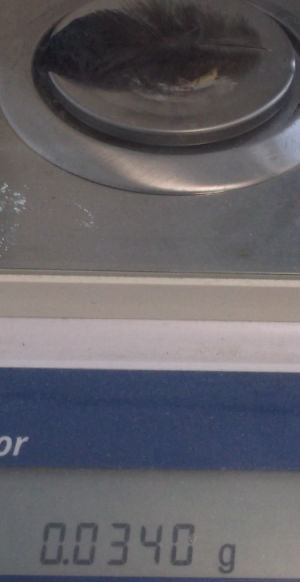 Above: This the average type that most people think of and it weights 0.0340g . It is from the back of a black rock. 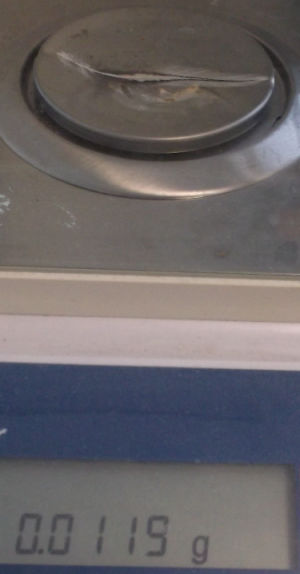 Above: The lightest feather I found in my flock was the hackle feather from my Silver Laced Wyandotte bantam and it only weighed in at 0.0119g or 119 ten thousandths of a gram.

Below: The heaviest one I found was the sickle tail feather from a full grown Barnevelder male and it was just over half a gram. 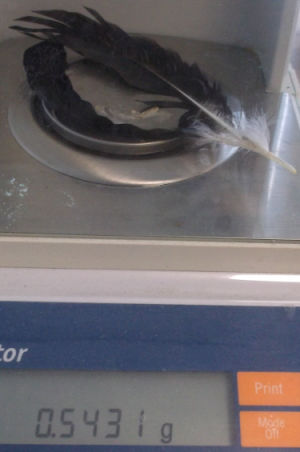 Using the middle ( average) weight one as an example there are at least:

Feathers are all different and the 6636 feathers we plucked from a single chicken (see below) weighted 340 grams or 0.340 Kg .

How many feathers does a chicken have?

So I have actually gone and counted it. One of my La Bresse cockerels that was destined for the pot and then plucked had 6636 feathers. So between 5 and 8 thousand feathers. Chickens always have roughly the same number of feathers, smaller birds have  less and smaller feathers and larger chickens have more bigger ones.

How long are feathers?

On a chicken they vary from 1cm to 25cm or even more.

The tails of the Yokohama may be over a metre in length.

Wing, hackle and tail feathers are longer whilst the contours are shorter.

What about the green sheen on feathers?

The green iridescent sheen on black feathers is much desired in the show world. Feather colour is produced by arrays of pigment bearing organelles called melanosomes.  Iridescence happens when the melanosomes are organized in stacked layers and they appear to shimmer in the sun.  This iridescence is widespread in birds and is frequently used in courtship displays.

Some say the green sheen is a signal of good health and the purple is a sign of nutritional deficiency in chickens.

The amount of green sheen varies between chickens so some have more than others.

Mostly it is found in roosters, but hens can have it too.  I have seen some beautiful sheen on the wings and body of very dark hens.  Sheen is more apparent in the sun where light can reflect from the feathers.

It can be selected for in a breeding program like any other characteristic.

How do chickens make Feathers?

They grow from follicles in the skin in a similar fashion to hair but stop when they reach the right size and don't grow continuously like hair or fingernails.

Feathers are made almost entirely of a protein called keratin. Beaks and claws are also made of keratin as well and so are your fingernails and hair. Keratin contains several amino acids in its make-up including cysteine, lysine, proline and methionine.

What is a henny or hen feathered chicken?

This is a type of backyard chickens where the feathers on both the make and the female are identical. 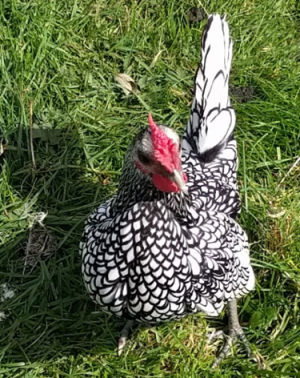 Seabrights like this one above are hen feathered. The pattern and type of feather on the male is the same as the female except for the comb

Do they have the same number of feathers on every area of their body?

For the most part they do. Smaller or bantam chickens have fewer and smaller feathers. Meat chickens are bred to have fewer feathers to make for easier plucking.

What are down feathers?

These are the fluffy loooking ones on the underside of the bird. Most body feathers have a downy section toward the base to provide insulation.

Does a rooster have the same number of feathers?

Probably. They do have slighly different feathers to the hens. Cockerels have more pronounced hackle feathers and showier tails.

Do chicks have feathers?

Chicks begin to grow feathers from about day two or three and it can take six to eight weeks to fully feather a chick.

Why do some have feathers on their feet?

Some birds have feathery legs and feet due to a genetic quirk. They are purely for show and it makes no difference to their ability to lay eggs. It does mean they often get dirty feet and scratty feathers that get discoloured.

Frizzles are chickens with genetically outturned feathers. They have been around a long time. Normally a bird with a feather mutation like this would never survive in the wild as they can not fly and the feathers don't trap the warmth or keep out the weather. 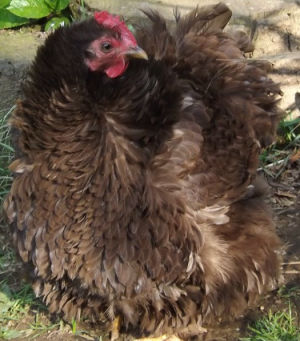 If you want to keep frizzle bird they need a little extra care and protection.

Man's use of Feathers:

Mankind has always had a fascination with feathers. In the early part of the last century, some birds were hunted to near extinction just for their feathers! Feathers are still used in some religious ceremonies, herbal remedies and in decoration of clothing and homes.

Here are a few more uses you may not know about:

Fishing lures- fisherman love ‘real’ feather lures!
Arrow fletches- still used by some archers. The tail of the arrow is made from feathers.
Feather meal- which is used as a fertilizer.
Textile fibers- this is a fairly recent development of integrating feather into material.
Building industry- they are experimenting with fiberboard and flooring using ground-up feathers in the mix.
Insulation- as in down comforters, jackets, pillows etc.
Some components of the feather are also used in diapers, plastics and paper.